I will always regret going back to the classroom when my middle daughter was only four months old. For the next eight months she had ear infection after ear infection until she had to have ear tubes inserted into both eardrums at a year old. I always womder if this was something that could have been avoided had my ego succumbed to stay-at-home motherhood for a little while longer.

Nevertheless, our pediatrician found nothing wrong with her ear drums a few years ago at A’s annual exam. After R’s accident though, we suddenly found ourselves in Maryland with the option of putting the girls in preschool while the oldest and I dealt with the aftermath of the accident. I was able to give them some sort of routine by enrolling them, a preschool that L, now five years old, still remembers fondly. They went twice a week while my son and I had alone time either by hanging out in Bethesda or by getting a meal with Daddy in his hospital room.

Before starting preschool, the girls got a quick check up by a resident pediatrician. While L was fine, the pediatrician found a tiny perforation in each of A’s eardrums.

How long had those holes been there? How was her hearing? A always had a way of selectively hearing my chore requests but could she really not hear me?

The doctor said that her hearing was probably muffled like trying to hear while underwater in the pool.

I couldn’t believe it was that bad. Poor kid.

I have heard A in speak in class before and quite frankly, it is way different than her voice at home. She’s loud at home. She speaks her mind. At school, she was squeaky, breathless, and sometimes voiceless.

Her ENT doctor yesterday said she could understand everything A said. Nerves probably, she offered.

I don’t doubt or dispute the teachers’ and pathologist’s findings. After all, they are with her for a third of the day. I hope and pray whatever they find with the girls is easily and quickly remedied! 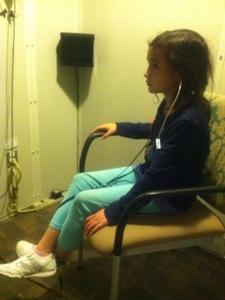