All I needed to know about life, I learned watching “To Kill a Mockingbird” while subbing.

“Old” movies: A student asked if it was going to be in color later like Wizard of Oz. Um, no. Kids seem to pay more attention to older movies, listening and watching for what is truly important. Less flash, more message.

Gun control: Atticus got his first gun at 14. His father said he preferred if Atticus went outside to shoot tin cans and blue jays later if the mood struck.
“It’s a sin to kill a mockingbird. The only do but one thing but sing their hearts out for us.”

Parenting: PATIENCE. Manners. With your kids and with your kids’ teachers. Being kind and stern at the same time is possible and preferable.
“That boy is your company. If he wants to eat the tablecloth, let him!”
“I don’t care what the reasons are. I FORBID you to fight.”

Swearing: Means more when it is done less. Nothing illicits more shock than hearing the N word said with such hatred in this movie, every class. Strange since these kids have probably said the spectrum of bad words before they stepped foot in this class but nothing like this, I’m sure. (And thank goodness!)

Leading by example: Scout asked why Atticus was doing something the rest of the town said he shouldn’t. He replied, “Mainly because if I didn’t, I couldn’t hold my head up in town.”

I got a phone call from the teacher I subbed for today, asking me if I was free on Monday because he was still very ill. I accepted the job but sought resources from his colleagues. One class read “To Kill a Mockingbird” last week and watched the movie with me today. The other classes watched Odyssey and the teacher asked if I read Othello as he was going to start the book with his classes on Tuesday.

So I borrowed those two books with every intention of rereading them this weekend. Each class was assigned a three paragraph essay; I surely could not let high schoolers just sit there, passively watching a movie.

“They wrote an essay?” The poor ill teacher asked. “On what?”

“I used to be a teacher so you know…”

If you’ll excuse me, I have got some reading to do. Yay! I have homework. 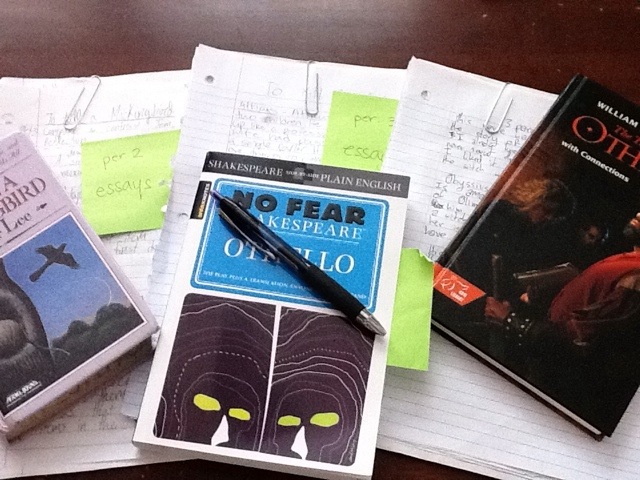 Oh, and here are some special savings on books, for your own reading enjoyment.