It started off with a quiet warning. A tingly sensation in my right temple similar to what I imagine Spidey Sense would feel in times of danger.

I had been flaking on my workouts in the past two weeks which is terrible news for my diet since those two are like bad influences on each other like best friends trying to break their shopping addiction but still bring their credit cards to the mall anyway.

On Thursday morning I did a much-needed ten minutes on the treadmill followed by an intense Zumba class. Three hours later I had a migraine that stayed until this afternoon.

Nothing helped. I took short naps, took pain medication, and practiced meditation only to find that none worked. Thankfully my kids were very understanding, limiting their shrieks to AFTER we exited the car and when they were upstairs whenever I was downstairs. They would eat their meals and snacks at an impressive low volume and then resumed whenever I retreated to my room.

Finally two hours ago I emerged from my IKEA comforter cocoon without a trace of that damn migraine. So I did what any other person would do.

I took the kids to a Mexican restaurant for dinner and frozen yogurt for dessert. 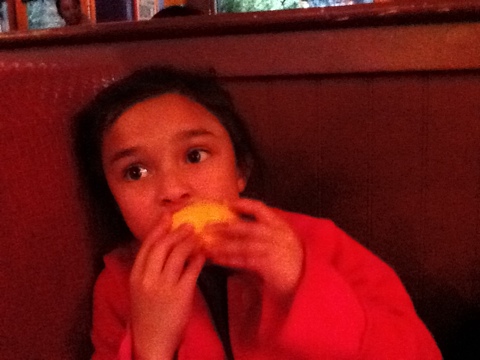 I have admittedly changed my habits for the worst in the past month: more coffee, more frozen foods, more stress, less exercise. And though since the onset of the migraine, I quickly turned the tables on this unhealthy equation, I fear that it wasn’t in time. I have had the occasional headache here and there but nothing like this. I am not even sure if that is how this migraine stuff works. All I know is that I should probably see a doctor if this happens again.

So here it is. No coffee, no diet soda, low sugar, low white rice, low white flour. You know how everyone says, “Everything in moderation”? Well, that was my moderation before the accident until stress and bad habits starting creeping back in my life again.

The next 5K is in two weeks and I plan on (gulp) jogging the whole thing again. There is a half-marathon on April 1st and I met a woman last weekend from church who suggested I POWERWALK it with her and other women from church.

The above is my Valentine’s Day present from my husband. Yes, it is a love letter in a glass bottle. No, you can’t read it! 🙂

8 thoughts on “The End of the Three Day Migraine”