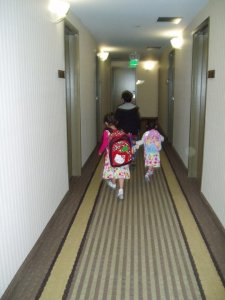 It happened when we were in Bethesda last April. 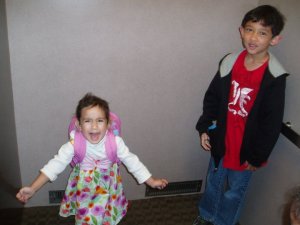 "I wanted to press the button!" Only heard this several DOZEN times a day.

The Warrior Family Coordination Cell was a godsend. They organized events that got families of Wounded Warriors off base that gave them the tiniest break from worrying.

When we received an invitation to go to dinner at the Royal Dutch Embassy, I can honestly say I didn’t want to go. My husband’s parents and brother had already left for home. It had been a couple weeks that I’d been out with all three kids by myself since the accident. While our kids are very well-behaved, they were still kids and I was mortified at all the possible things that could go wrong.

Most importantly, what would I wear? 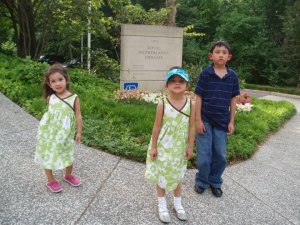 Welcome to the embassy. We will be running around in circles in the driveway while mummy drinks the free wine.

I was relieved to know that it was not a sit down affair and children were welcome. Phew.

We arrived by bus and marveled at the architecture and landscaping of the embassy. The kids and I took a few pictures. I had a glass of wine. 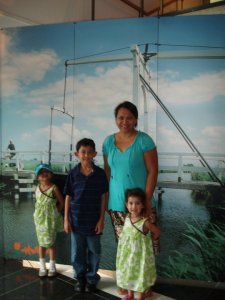 I saw a couple of babies at the dinner, both securely fastened by Baby Bjorns to their parental units. This wasn’t children, I thought. Babies weren’t children! Children run, pull table cloths, and say inappropriate things at the wrong times. My three were getting antsy inside and I could tell they needed to run so we went outside and found a table for us.

I let them chase each other in the large front lot of the embassy because why not? Better out there than inside with glass bottles and people to knock over, right? They were soon joined by a boy about M’s age. And the chasing continued.

I later caught up with the boy’s mother. She said that her son saw my kids from upstairs and wanted to come out to play “with all the kids”. They’d moved to DC area about a year ago from the midwest. His father lost both legs when his vehicle ran over an IED in Iraq. She had to pull her son out of school mid-year and start over in DC so they could be together while her husband continued his rehabilitation at Walter Reed National Military Medical Center.

I had to swallow because the lump in my throat was hard to ignore. I asked her, “How is your son coping?” I apologized immpediately after I asked. I felt stupid for wondering, for prying, and for thinking that I had any right to any information not offered.

If she was offended, she didn’t show it. In fact, she said it was okay and went on, “My son does remember a time when Daddy had legs and I’m thankful for that. He [her son] is going to a new school and he’s doing well there.” I admired their courage, openness, and honesty. I felt a glimmer of hope when I talked to her and when I watched all four kids run in circles. 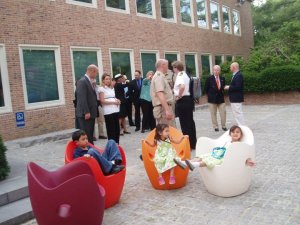 VIPS in the pic above. I'm sure the people behind them were pretty important too.

The week before he cried himself to sleep every night. He wanted to go home and to go back to school. He hated sharing a room, let alone a bed, with anyone. He tried to make deals with me like promising he’d clean his room for a month if we went home.

I didn’t exchange phone numbers or email addresses with that family. My husband’s accident had happened only a couple of weeks before so I was still numb. Looking back I realize now that so many reached out to me and while I heard it, I didn’t listen. I couldn’t listen. It was hard to hear anything over the echoing, neverending worry in my head.

All I remember is being thankful that the kids and I met another family who, while their circumstances were far different from ours, faced an extremely difficult situation and who were now trying to move forward in their lives. I had hope that no matter what was happening, recovery for my husband was not only a possibility but a real goal. No matter what, we could face this accident and we would move forward like that brave little boy.

If you’ll excuse me, I’ve got some reading to do.

One thought on “Dinner at the embassy and glimmers of hope”