M had an awards assembly today where he said he earned the most awards in the whole school, including an award for straight A’s.

Here is photographic evidence that AT LEAST ONE PERSON believes in him. He’s the one standing with all of those awards. 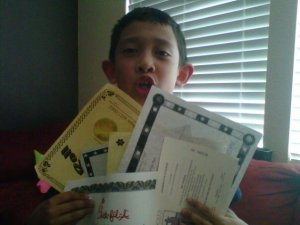 Who else believes in this kid?

14 thoughts on “Who believes in this kid?”