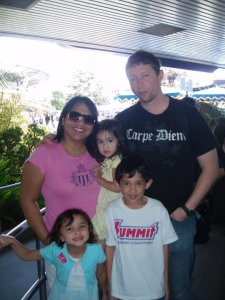 One thank you I didn’t expect, especially after the accident, was this: “Thank you for not leaving me.”

And he said it repeatedly.

To which I’d reply, “Why would I leave you?” Dumbfounded, of course.

Then he’d rattle off reasons why any woman would leave at this point in our relationship. “I’m broken. Look at me. I don’t even recognize myself.” Sure, he was banged up, physically and at times, emotionally. So?

“I’m useless. I can’t even help you with the kids.” My husband was bedridden for about two months and in a wheelchair for four. Um, you are supposed to heal right now and not worry about us. Besides, I can’t tell you the number of times I’ve left any combination of the children in his care for short periods of time, even when he was at NNMC in Maryland. In hindsight, maybe it wasn’t the smartest thing to do but I wasn’t gone that long and I left the potty-trained ones.

There was one time (oh, he’ll be mad if he discovers this blog) when he was still over at the VA in Palo Alto that shook me to the core. He was still in a wheelchair, still learning how to transfer from bed to chair and back and that day he was transferring to the toilet when all of the emotions building up inside of him exploded. One of the kids didn’t put on the toilet seat properly which caused him to almost fall. The kids and I were watching TV in his room when I heard a crash and an F-bomb. Okay, he’s a sailor. It was a string of swear words and a nurse that was helping him left in a hurry. Other nurses came to assist.

I asked what happened in there and he was still angry, still swearing. And I know it wasn’t anyone’s fault. No one had done anything wrong.

But I started bawling and the kids were looking at us with big eyes. Even now I can’t type this without blowing my nose a gazillion times.

In this moment, everything became clear. He’s here but he’s not. He’s been through something so terrible and so awful and so nightmarish; I couldn’t deny it any longer. 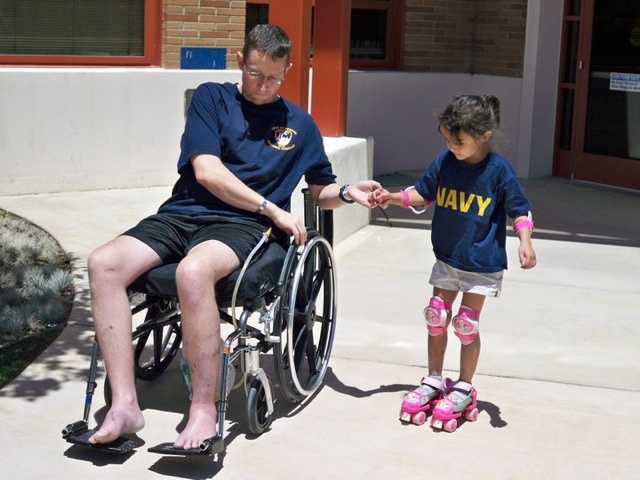 My husband is a Wounded Warrior. He’s not going to be the same.

I believe because of his stubbornness, his determination not to let this rule his life, he will try his damndest to keep it together.

Now if you know me personally, you’d probably describe me to be positive, funny, and extraordinarily beautiful (had to throw that last one in there to see if you were paying attention). I don’t wear my dark emotions on my sleeve. I tend to glean over scary details. But who wouldn’t? Self-preservation? Maybe. Still in denial? Perhaps.

I am sort of embarassed to admit that we went to marriage counseling after this while he was in Palo Alto but it was the best thing for us. The psychologist was a very sweet woman who baffled my husband when she suggested she take the kids for a couple hours so we could spend some time together and they followed her like Pied Piper. It was essential that we had someone listen to us and help us sort out emotions that were starting to bubble over.

He shared with her that he thought all the women he saw at the VA, spouses of Wounded Warriors or of TBI patients, were amazing. Their husbands, he said, were really lucky their wives were still with them.

Later I asked him, “Why wouldn’t they be?”

He said, “Most women would probably leave.”

I shook my head. “I think those women would have left anyway, accident or not.” Like when we used to talk about how he knew so many people in the military who cheated on their spouses. But I believed they would have cheated anyway, even if they weren’t in the military.

I have seen many spouses spend almost every breathing moment with their loved ones. They’d stay until a nurse or doctor gently suggests they go to their hotel rooms to get some rest. I met an Army wife in Bethesda who’s husband was wounded by an IED a second time, the first being only three years earlier.

Are these spouses amazing? Absolutely. Show me one that would leave at the first sign of hard stuff and I would bet my favorite Coach platforms that she was planning on leaving regardless. Just needed an excuse, that’s all.

So in case you were wondering, he still thanks me for not leaving. And when he does, I take a deep breath and say, “I’m not going to leave you. I’m not going anywhere.”

10 thoughts on “Thank You For Not Leaving Me”